If it was annoying we fixed it, if it was dangerous we cured it, and if it could be improved, we did that too!

Aloft Hobbies along with the other three Service Dealers in Europe and the UK have developed a new firmware for your ACCST devices. We teamed up with an RC guru, Mike B, to develop new receiver firmware for many of the FrSky ACCST receivers. The goal is a better user experience and improved performance for the FrSky ACCST protocol. ALL FrSky transmitters can use ACCST (also known as D16), from the very first Taranis to the current Tandem X20S and everything in between.

What can it do?
Receivers with this new "universal" (or UNI) firmware will be able to bind to the following with ease:

Yep, you get all four of these in a single simple to use receiver. No more switching out firmwares and going insane. During the normal bind process, the receiver automatically switches until it finds the version your transmitter is running. How simple is that?If you are using V1 in your transmitter the new UNI Firmware mitigates the V1 bug to the point it is of very little concern. Mike has also added some magic to reduce or remove the typical signal swamping that occurs when the transmitter is very close to the transmitter, you know the good old message: "Telemetry lost. Telemetry Found." warnings. Everything else works like you would expect it to. Servos run when you plug them in, Sbus is there, all the normal telemetry, and maybe a couple of tricks that you can turn on via a LUA script on your transmitter. Heck, we even added the good ol' CPPM for the X4R receivers.

CHANNEL MAPPING
The individual servo outputs may be mapped to the control channels, any output may be selected to be for any channel. Want PWM channel 1 to output channel 8? No problem, this can be setup via our LUA script.

AUTOTUNE
Since all radio gear has some tolerances the frequencies can shift up or down slightly. The AutoTune adjusts for this to get the best signal match for the transmitter. This can result in improved range. This is part of the bind, nothing special you need to do.

VFR Telemetry
We added the VFR telemetry value so you now have a better RF quality index. RSSI is a good starting point for RF quality, but VFR (Valid Frame Rate) is a better statistic to use for grading the RF connection quality.

Some of the items fixed we cured:

Some of the items added to UNI:

Many thanks to our beta testers who helped test all sorts of different configurations, (over 50 versions!). We managed to solve everything we identified as a weakness in the stock FrSky firmware as well as adding a number of new features!

Uni is only available from the Four FrSky SERVICE Dealers, Aloft Hobbies in the USA and the others are in the UK, CZ and Germany.

Due to the threat of clone manufacturers we can not make this initial firmware available for download. We wish we could, but since FrSky does not own this firmware we have to be careful. (Cloners have already copied FrSky receivers and firmwares and sold them and been forced to stop via the legal system in China. In this case, we have made something that would be very attractive to clone manufacturers as it would get them around the FrSky ownership.)

Your first install of UNI must be performed via one of the four SERVICE DEALERS around the world. Once the Universal ACCST firmware has been installed on your receiver, any future updates could be had via a download. No need to send the receivers in for an update. Also, if you for some reason you want to go back to a FrSky firmware, you can do that too.

"the goal was to breath new life into the older gear and help to maintain ACCST into the future, and also cut down on the confusion for our customers. Prior to ACCST V2 we hardly ever had anyone asking us "how do I bind this?" These days we get that question a lot and we have frustrated customers. This new firmware makes that whole mess go away." 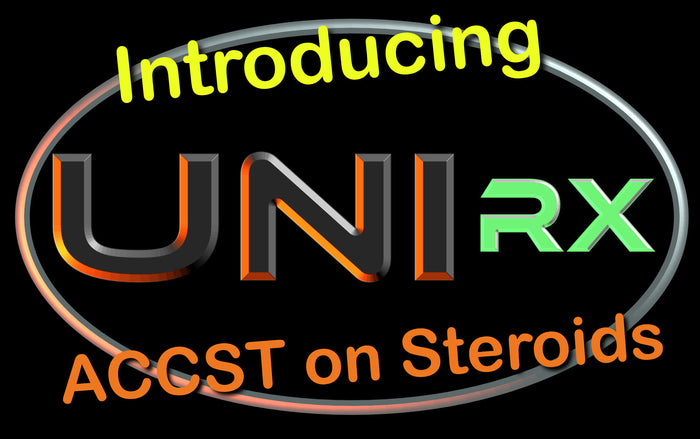 as one of the beta tester, a great work has been done here!! work with V1 V2, work with FCC and EU additional options will use only this firmware from now on. hope they support the S8R & G8R as well in the future

UNI-RX - Universal ACCST firmware for your receiver
1 review
$6.00
Back to New Products